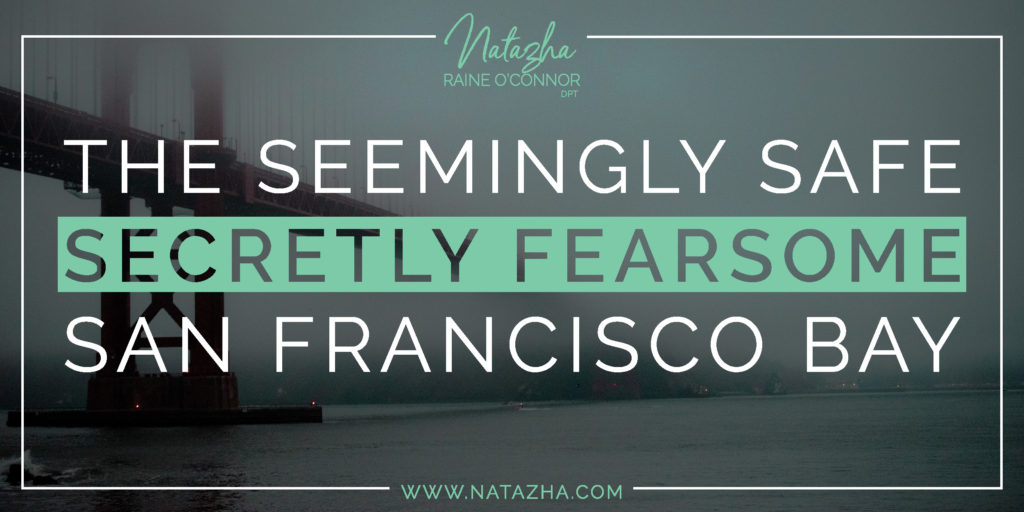 Last spring, I and twelve other whaleboat rowers saved a swimmer from the seemingly safe, secretly fearsome San Francisco Bay.

My post-rescue fear is fueled by many first-ever events leading up to the rescue. That Sunday was the first time an ERC recreation whaleboat launched from the Hyde Street Pier instead across town in my neighborhood. After 20 years of watching ERC whaleboats from our living window for the first time ever I rowed in one. Given the unusual location, ERC sent out additional emails to guarantee recruiting enough rowers. Too many rowers showed up so we got off to a late start. That created perfect timing for a first-ever ERC whaleboat rescue of a swimmer.

Rowing past the Aquatic Cove breakwater seawall, we heard some tourists yelling, “A woman was swept out to sea.”

Instead of rowing to Alcatraz, we rowed east and found her clinging onto the seawall for dear life. She was barely audible and clearly out of her body when we hauled her into the whaleboat.

I and another rower evaluated her wounds and helped her recover from her trauma. I’m a doctor of Physical Therapy, but that’s not the credential I used that morning. I’m also a graduate of the Berkeley Psychic Institute and fellow Dolphin Club swimmer who knew this swimmer’s name. Her glassy eyes and blank expression revealed she was still negotiating with the Grim Reaper. I communicated with her spirit by meditating, repeatedly called her by her full name, and firmly held her legs to help her get back into her body.

We hugged each other when she finally looked me in the eye and responded, “Yes, I’m Debby.” Like most Dolphin Club members, Debby’s fierce and proud. She wanted to jump out of the whaleboat into the Police Boat unescorted, as if nothing had ever happened. I’m honored she trusted me to escort her to the woman’s sauna where she finally realized what had happened and needed more comforting. She explained the sea seemed possessed. All was fine until the bay suddenly kidnapped her.

That’s when I starting feeling spooked by sea’s sinister, sneaky behavior that day.

I started experiencing vicarious trauma. I decided not to swim to the breakwater seawall as planned. Instead I swam a much shorter distance along the shoreline. That afternoon I took a yoga class to ease my haunting anxiety.  The rescue highlighted just my own recklessness. I realized I often act out my rebellious spirit while rowing and swimming. Just that Friday, I had told my rowing partner Scott, “I don’t care how windy it is. I feel like I’m saying F.U. to Trump by defying that howling wind and rowing anyway.”

I know it’s crazy thinking to link Trump with rowing or swimming, but many people think it’s crazy to swim in the frigid San Francisco Bay water period. And, my rebellious spirit and insane thinking fuel many of my outdoor adventures. I’m not sure I could or should even try to tame my inner rebel, it’s at the heart and soul of my passionate relationship with the sea. But, now I realize I may have no choice but to be more careful when I navigate the supernatural San Francisco Bay.