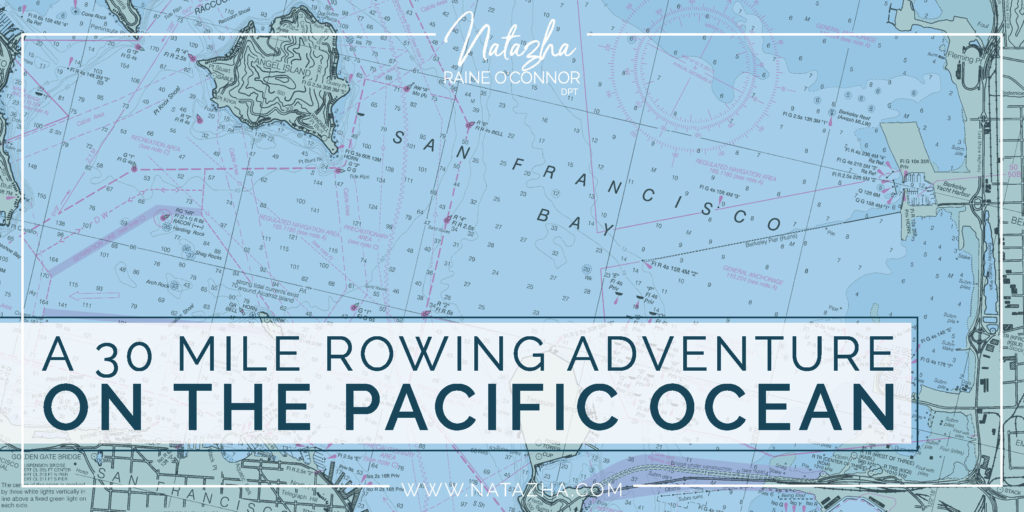 A Thirty Mile Rowing Adventure on the Pacific Ocean

What surprised me most about rowing 30 miles on the Pacific Ocean was my psychological hangover. 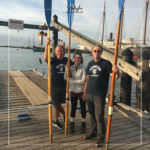 What surprised me most about rowing 30 miles on the Pacific Ocean was my psychological hangover.  Who knew this rowing adventure would teach me that dropping a belief is akin to dropping acid? I never experienced any physical pain; however, I’m recovering from smashing some deeply ingrained beliefs to smithereens. It’s a week later and I still feel disoriented and sore in the dark recesses of my psyche where I released some shame and outdated notions.

My adventure at sea began at 4:50 am on Tuesday October 10th when I met my fellow rowers Paul DuBois and Scott Stark to prep our boat. We embarked from the Dolphin Club dock in San Francisco’s Aquatic Park at 5:45 am. Reaching the Golden Gate Bridge in less than 30 minutes proclaimed we were off to a stellar start.

Other than smoke from the North Bay fires creating poor visibility, we enjoyed favorable conditions: mild-to-no winds, 8-10 foot swells, and a tide pushing us toward our destination of Half Moon Bay. As the sun rose over Fort Funston just around 7:00 am, we calculated our rowing speed was 5 miles per hour, faster than we anticipated.

Mother Nature treated us along the way with spectacular sights, sounds, and scents.

The sunrise looked more like a sunset oozing with a sensational, blazing orange resentment about the smoke-filled skies. After seeing so many versions of blue I remarked, “As a rower, you’ve got to love the color blue.” We took in skies and sea changing from navy blue to azure to aquamarine to black-and blue at the infamous Mavericks. Although we rowed by Mavericks on a calm day, the bluish-bruised color announced the drama that takes place every year at the Annual Mavericks Surfing contest.

My favorite sight of all though was the swaying kelp forest. At first I mistook it for baby seals bobbing their heads. Upon closer inspection, I learned the ocean swells were orchestrating synchronized dance routines with the kelp.

Pulling into Pillar Point Harbor I felt exhilarated about breaking through a glass ceiling at the Dolphin Club.

As far as we know we are the first Dolphin Club members to row to Half Moon Bay in its 140-year history. Also, the levies made of boulders lining Pillar Point Harbor took me back to my hometown of Sayville on Long Island. I began reflecting on why I never sailed or rowed in my youth. My parents raised 11 kids and just didn’t have the money or time for those things. I grew up believing boating was only for wealthy, privileged people, not me. And, women over fifty were too old and unhealthy for rigorous exercise.  At 55 years old, my Mom was incapacitated with severe COPD and my Grand Ma Winnie suffered from rheumatoid arthritis and kidney disease.

I began feeling disconnected from my ancestors as I recognized at age 55 I exercise rigorously almost everyday and enjoy a privileged, upper middle class life. I’m betraying the life programmed in my psyche and genes. Dropping my belief that only “other people” enjoy boating and fully accepting my privileged life has turned my world upside down. I feel drugged as I upgrade my Sayville self to my San Francisco self and discard so many outdated notions about myself. I’m so grateful my meditation practice enables me to process this topsy-turvy change in my psyche.