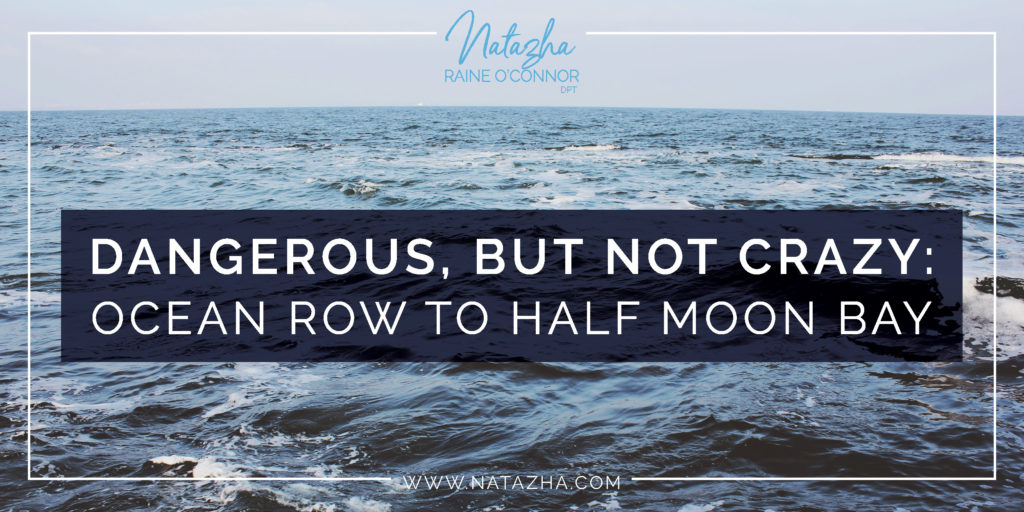 Dangerous But Not Crazy: Ocean Row to Half Moon Bay

“Don’t worry, Bob. A row to Half Moon Bay is dangerous but not a crazy idea.”

I hug my husband Bob and continue, “I’m rowing with Paul and Scott, two experienced, strong rowers. I’m honored they asked me to join them.”

Here it is four months later, and the debate of whether it’s a dangerous or crazy idea looms over our rowing expedition. The Board of our rowing community, the Dolphin Club, denied permission to use one of its boats; they thought this row was a “crazy idea.” Our next-door rowing club also denied us permission for the same reason. So Scott bought a rowboat.

Tomorrow night Paul is hosting a dinner for us three rowers and our spouses. The goal is to convince them our row is dangerous, but not insane. “Yes, Mother Nature throws unexpected temper tantrums, but modern technology is much better at predicting them.” Bob was fine with this rowing trip until a family friend, Steve told him, “Don’t listen to Natazha. It’s a crazy idea.” He’s been a merchant marine for over 25 years, and expounded on all his near-death experiences at sea. He convinced Bob we needed a motorized boat following us in case a rogue wave capsizes us.

I don’t want a motorized boat following us. It defeats the whole purpose of going out where we can’t see the shore anymore to commune with raw Nature. My desire to row on the open ocean was an acquired taste. I picked up rowing in my forties. At first rowing in Aquatic Cove at the end of Van Ness Avenue in San Francisco was exciting. Then rowing 5 miles round trip around Alcatraz was an adventure. I topped that with twenty-mile rows around Angel Island and back. Then I graduated to rowing 105 miles from San Francisco to Sacramento. This summer I began rowing past the Golden Gate Bridge onto the Pacific Ocean proper.

Suddenly the San Francisco Bay seemed like a bathtub. I got addicted to the bellowing ocean swells that made me feel like I landed on another planet with very foreign ground rules. Air spiced with salt water vibrates differently. Whales spout and check out us humans just as much as we check them out. Besides I’m a breathing ambassador, and to me- more so than the wind- waves exemplify breathing. The ebb and flow of waves lapping against the shoreline exquisitely embodies the spirit of respiration. The water comes in and out just as air comes in and out of our lungs. And like our breathing, the pace and quality of sea waves changes with the mood and occasion at hand. Rowing on the open ocean feels like I’m sitting of top of the Earth’s bellowing lungs.

I’m certain we will be safe and thoroughly enjoy our escape from land when we row to Half Moon Bay. Even under the best conditions this row will take at least eight hours. We’ll rotate through positions in the boat. Each one rows for 40 minutes and then steers for 20 minutes. In that 20 minutes, you can drink, eat, and pee. All three of us are perfectly fit to tackle this row.

When we complete this row, we will have proven it wasn’t crazy or dangerous, but rather a marvelous idea.