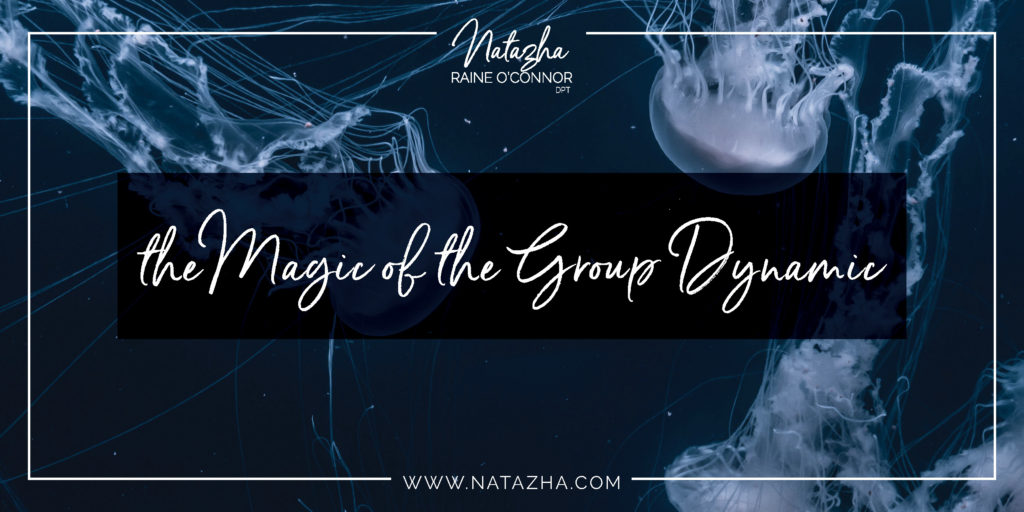 The Magic of the Group Dynamic

In 2014, I heard the world-renowned meditation teacher, Thich Nhat Hanh speak in Oakland.

He lectured on the necessity of having a sangha or meditation group. He explained as individuals we’re like tiny drops of water. We easily evaporate as we attempt to reach the sea.  However, as a group of water droplets we form a river that can successfully flow to the sea. He emphasized over and over again the importance of community to maintain habits such as meditation.

His image beautifully exemplifies the magic of group dynamics. The whole is greater than the sum of our parts. I began teaching group yoga, Pilates, meditation, and sports conditioning classes in 1993. And after decades of teaching, the awesome power of group dynamics still never ceases to amaze me.

For instance, I once taught a man in his early fifties. At first, he only took private Pilates lessons. Whenever I asked him to do pushups or planks he refused. He explained they were just too hard for him. He was never able to do them even as a young man. After a year of private lessons, he joined my group Pilates class. The class had quite a few women older than him that routinely performed all sorts of advanced pushups and planks with various props.  I’ll never forget the look on his face when he saw these women doing advanced pushups with grace and ease. His mouth literally dropped. From that day forward he did all sorts of pushups and planks with no complaints.  He later told me, “After seeing women my Mom’s age perform planks and pushups, I realized that I should at least attempt them. And I was pleasantly shocked at how well I did them.”

His story is not unique. Humans possess what are called mirror neurons.  These neurons fire when we perform an action or see someone else perform that action. Our mirror neurons mirror the behavior of other people and get fired as if you did that action yourself. When you are in a class, you learn from merely watching your classmates. Seeing your peers perform an exercise prepares and motivates you to perform it. Also, many students tell me that they finally understood a posture correction that I gave to them only after they saw me give the same exact correction to another student. It’s another example of our mirror neurons at work. Here’s another important point about group dynamics. Humans match their energy through their breathing and posture; therefore, group dynamics are also reinforced through our breathing and posture. It’s one of many reasons why Buddhists such as Thich Nhat Hanh practice meditation in groups. Group practice allows the magic of the group dynamic to reinforce our good habits. It also points out the need for us to meet in person to take advantage of the group dynamic that’s governed through our breath and posture.

Lastly, humans are generous creatures that thrive in communities. We grow by cooperating with and teaching each other. A healthy group dynamic allows us to thrive by sharing with each other.